Examples of Our Range

Our team of reliable long term professionals guarantee you the best quality and speediest service ever.

Our founder Max Konnopke was 29 years old when he decided to move from Cottbus to Berlin and become a Wurstmaxe - sausage seller. So began in 1930 the history of Konnopke’s Imbiss, Berlin’s most famous currywurst stand under the Magistrate’s Viaduct in Schönhauser Allee. What started with Max and his Wurstkessel – sausage tray, with his wife, Charlotte at his side, became a Berlin Attraction. Since then it’s all been about sausages, in the war also from time to time about potato fritters. From 1960 onwards the first Currywurst in East Berlin has been available with ketchup to a family recipe. Konnopke’s became a cult. The Currywurst survived reunification and it’s new challenges including the rapid changes in the local area.

Today Konnopke’s team serves the locals, visitors and party people with sausages and more from morning to evening. 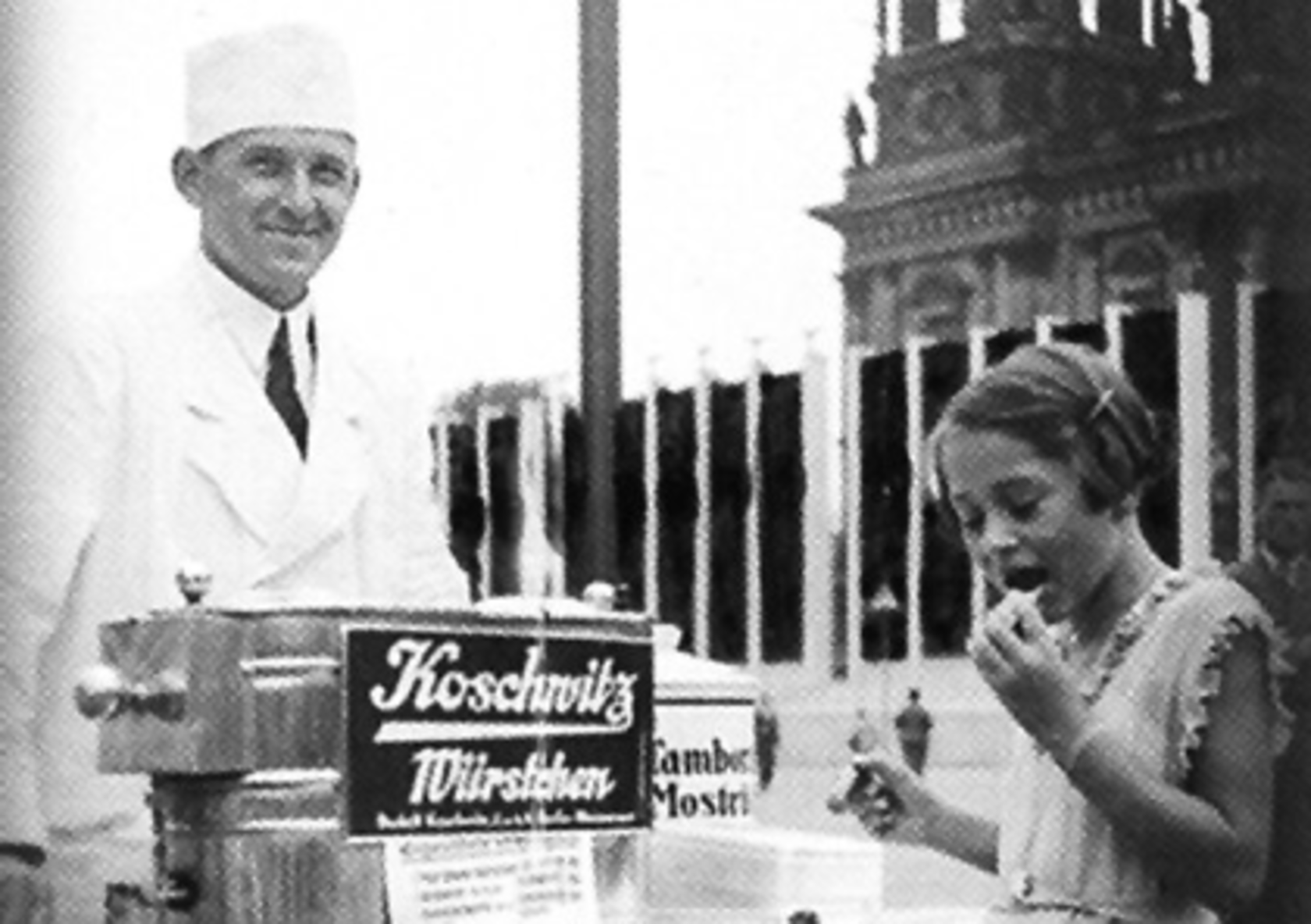 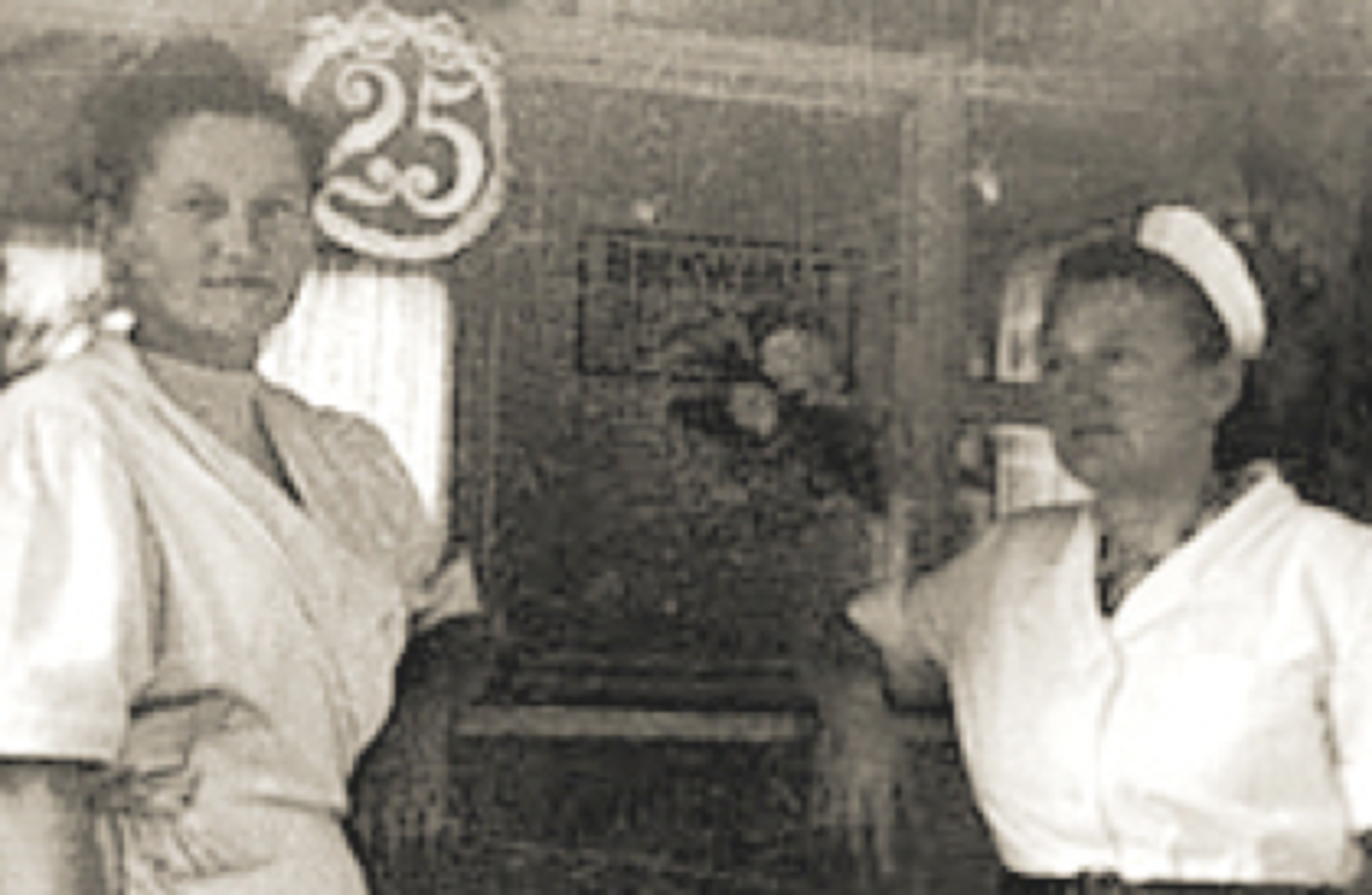 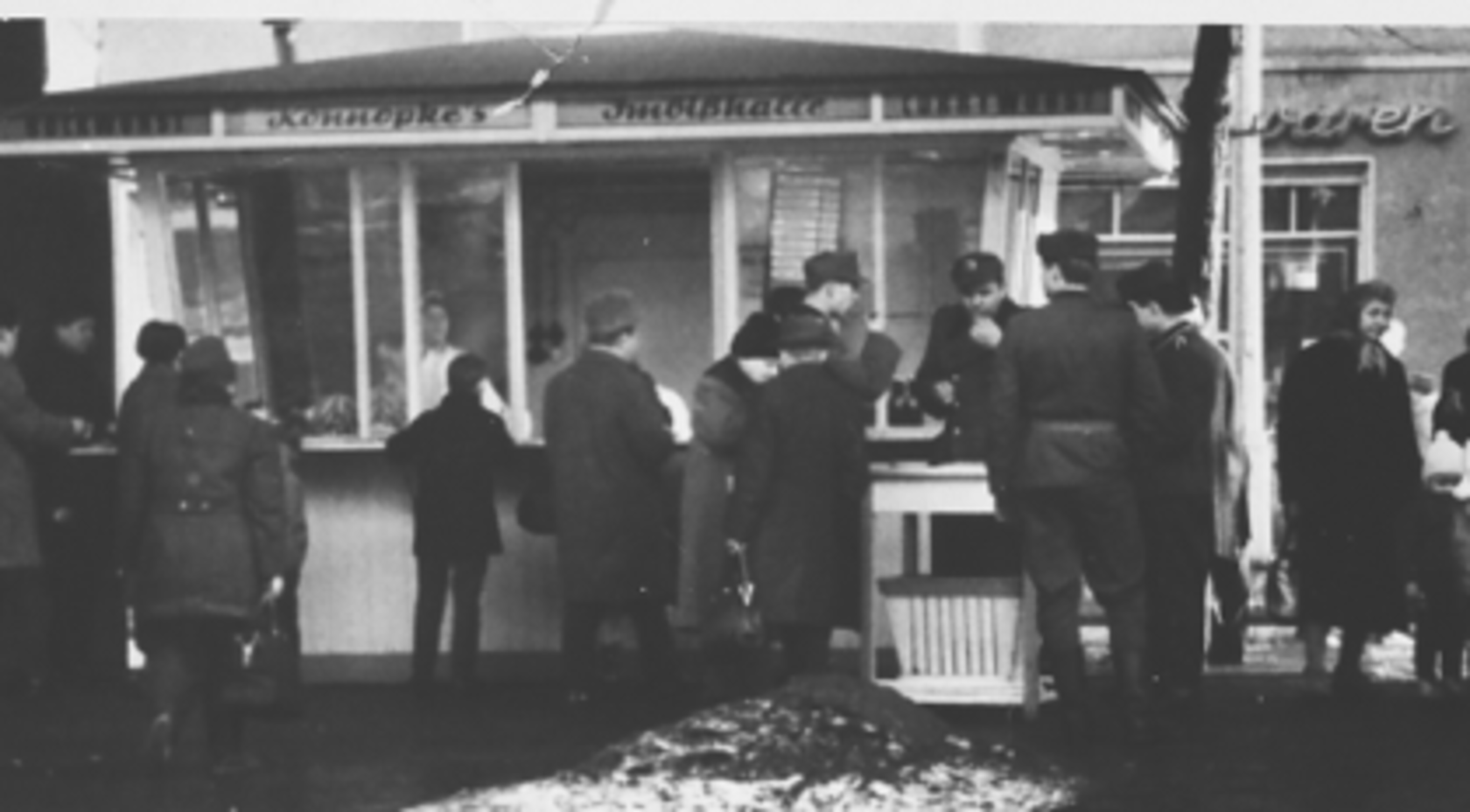 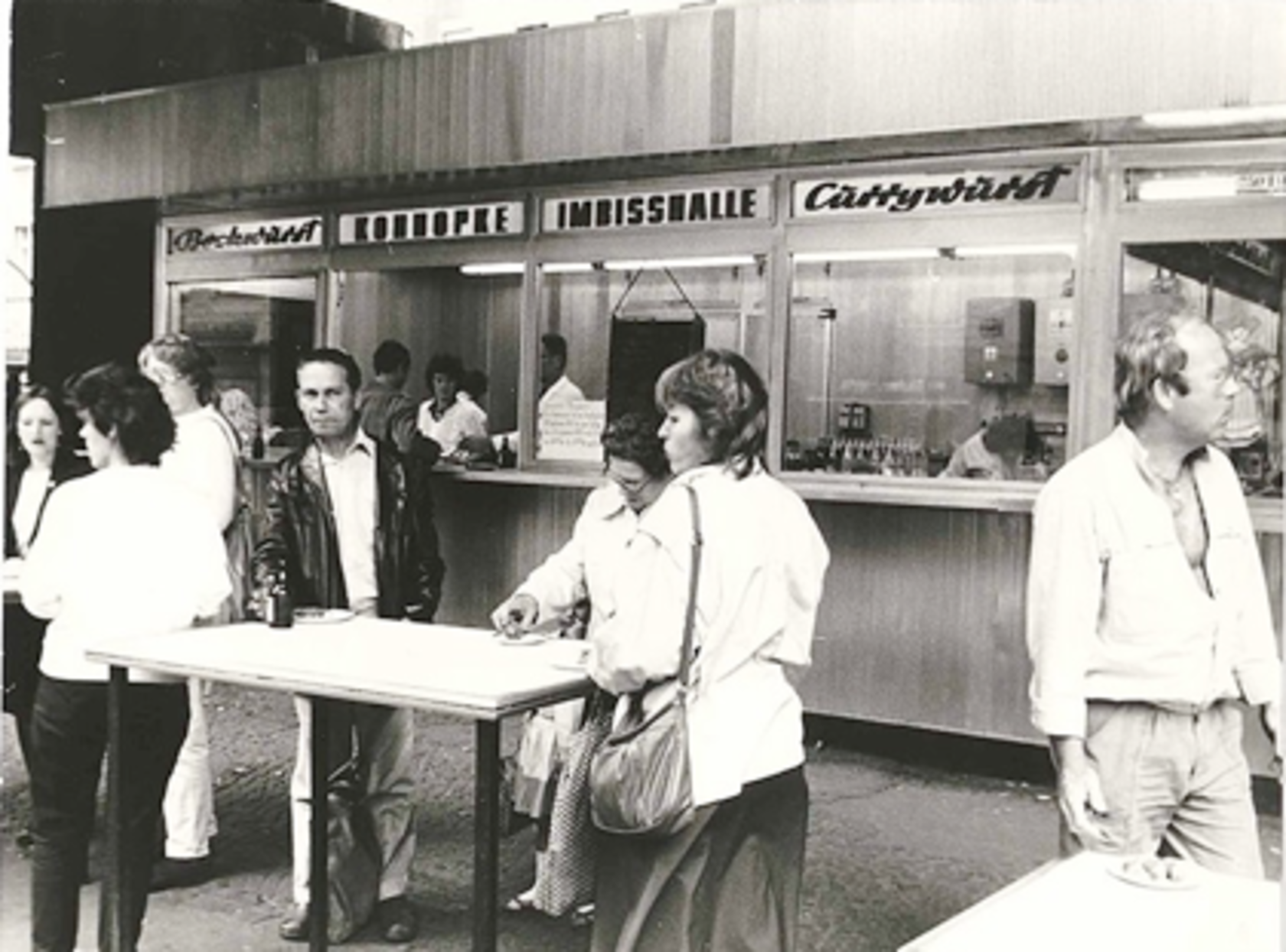 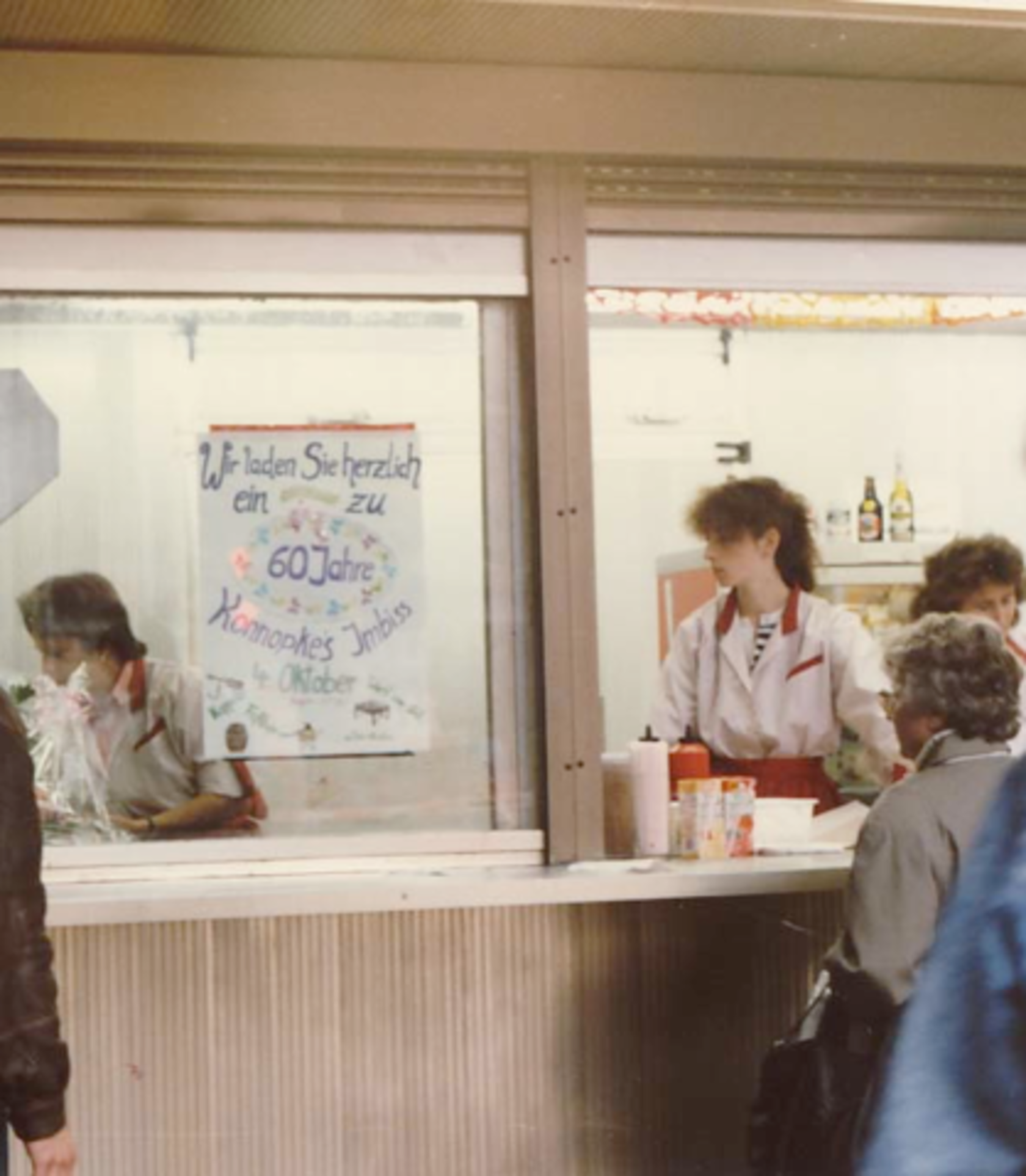 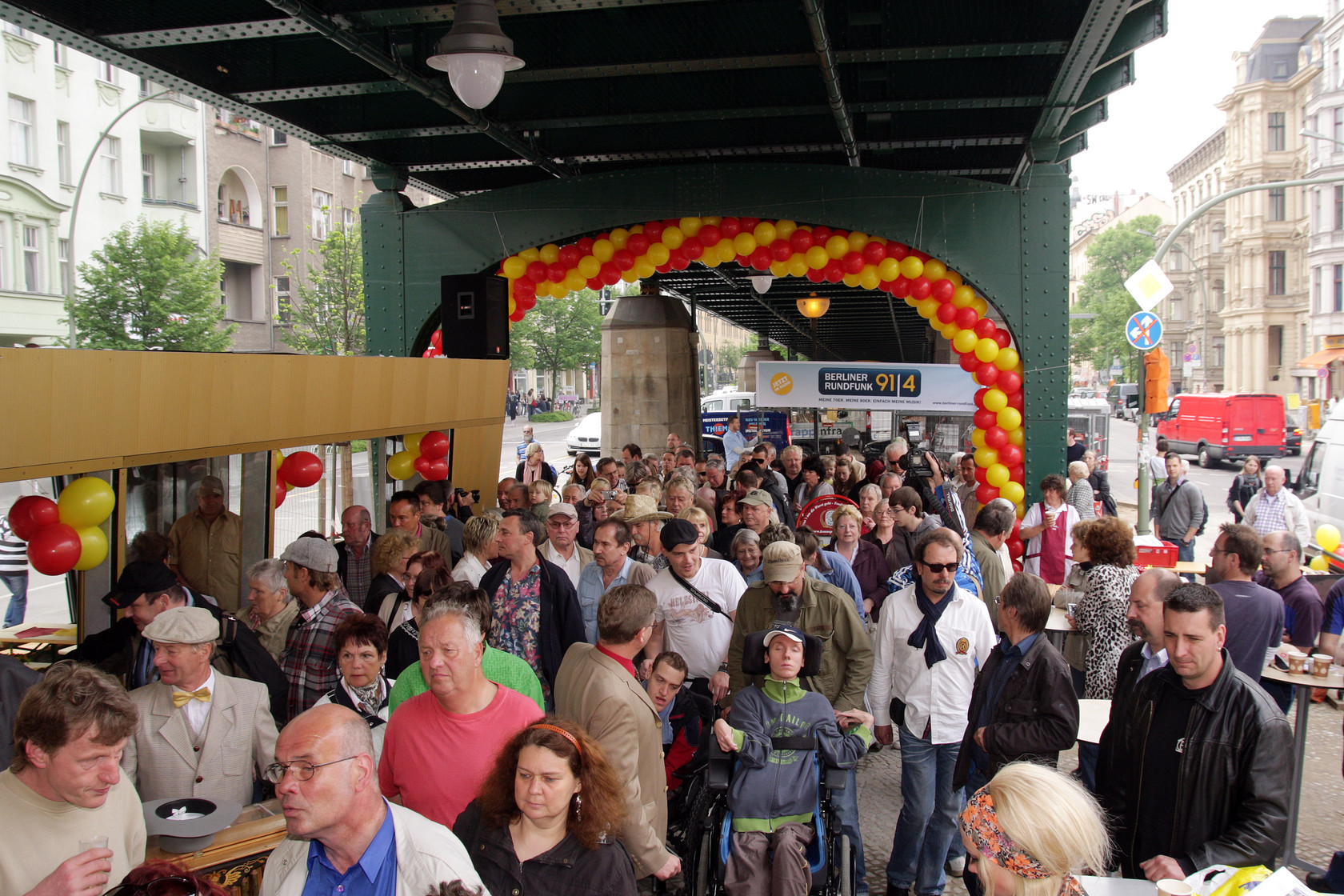 Max Konnopke was 29 years old when he came from Cottbus to Berlin and decided to become a Sausage Seller – known as a Wurtsmaxe in the Berlin dialect.

He achieved this very quickly and married his beloved Charlotte. From 4th October 1930 they both sold a range of sausages and frankfurters in Prenzlauer Berg from 7 pm to 5 am seven days a week. Max stood on the busy corner of Schönhauser Allee / Danziger Straße; Charlotte served hungry customers at the corner of Schönhauser Allee / Stargarder Straße. using only a folding table, an umbrella and a sausage tureen. Nothing more was needed.

Soon Max had a motorcycle with which he travelled to other areas. and Charlotte moved around with her tureen to the construction sites in the city. When meat became scarce after the war began and could only be obtained with coupons, they just sold potato fritters. Thus they could make a living.

In 1941 Max was drafted into the army so Charlotte had to provide for both children, Waltraud and Günter, on her own. 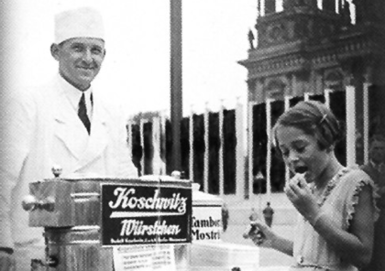 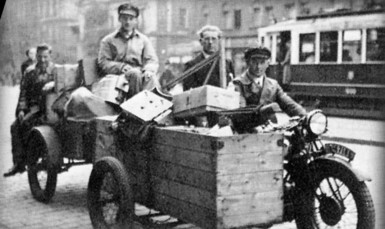 After his release from a P.O.W. camp, Max Konnopke managed to get together what was needed to build two wooden booths. One was on the corner of Schönhauser Allee / Dimitroffstraße (today Danziger Strasse), the other on Antonplatz in Weissensee. Both he replaced shortly afterwards with carts as they needed to be rolled away at night to comply with regulations.

Their daughter Waltraud trained in a bakery, son Günter as a butcher. Waltraud later joined the family business. Her husband Kurt Ziervogel was also soon part of the business. From 1958 they sold sausages together at the weekly markets in Prenzlauer Berg and helped out at the two stalls. They also sold their products at the Berlin Christmas Market. Their potato fritters were a hit! 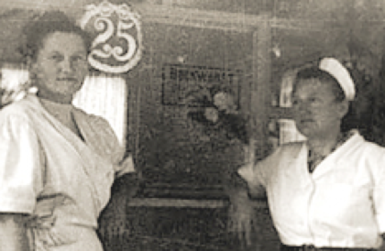 1960 The first Currywurst in East Berlin

Son Günter started work in 1960 at a butchery in Wedding, West Berlin where he encountered the Currywurst. They weren’t available in East Berlin but that was about to change...

Working with their butcher, the Konnopkes quickly devised a recipe that created a skinless Currywurst from their sausages. The sauce recipe was created in the kitchen at home. The whole family was involved and has kept the secret in the family to this day.

The Currywurst was introduced to East Berlin: At Konnopke's!  Fried in lard and served whole on a plate with the delicious sauce on top that was still mixed by hand at home by Charlotte Konnopke, the family matriarch.

With a kiosk that Max Konnopke designed himself, the stands were replaced in the same year in both the Schönhauser Allee in Prenzlauer Berg and in the Berlin Allee / corner Mahlerstraße in Weissensee. The kiosks had electricity and water connected operated with propane gas, and were permanent. There was even a freezer. They were glazed all round.

At half past four in the morning, the light in the windows lured the revellers from Prenzlauer Berg, & Weissense, craftsmen from the surrounding factories and shift workers to the kiosk in the "Boulevard of the North" Soon they were happy to stand in long queues for a Currywurst. Things were happening. 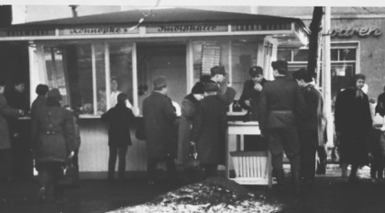 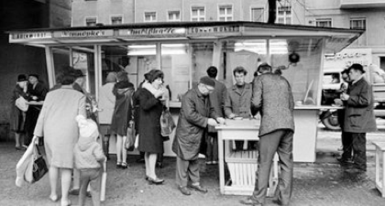 Max Konnopke, the man that could do & did everything himself, became sick. So he passed the by now well known stands on to his son and daughter. The second generation began. Günter in Weißensee and Waltraud chose Prenzlauer Berg.

Every day of the week, in the mornings just after 4.00, she entered her domain. It didn’t take long before she was on personal terms with most of her customers who called her either Wally or Traudchen and became a kind of mother to the area. The stand was very busy. Except at weekends. Then it was shut.

In 1983 Waltraud had a new kiosk built in the style of the times, out of shiny yellow metal. It looked like the many Intershops that were a feature of East Germany. Max Konnopke knew that his business was in good hands as he died in 1986.

In 1987 Waltraud went further. She extended the kiosk and used the space to sell filled rolls. Those who wanted to sit & eat could do so in the covered area she had built the same year.

Konnopke’s became an attraction, a magnet for Berlin and it’s guests. 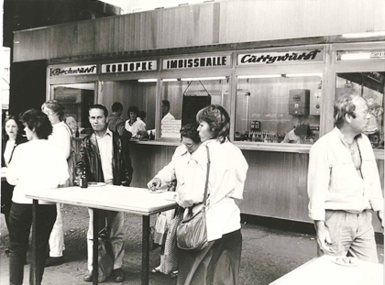 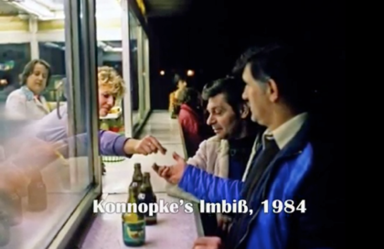 1990 Traditional Taste with a future

Reunification was a departure into the unknown. Prenzlauer Berg changed rapidly. New customers, new site conditions, new desires and new regulations. Press, radio and television had an ongoing topic, far beyond Berlin: What would happen now to Konnopke 's?

The third generation was involved. A new kitchen was installed. Fries and coffee were introduced but the Currywurst remained skinless. New was that it was served sliced on a paper plate, with additional curry powder and five degrees of spicyness.

In 2000 Günter Konnopke (d. 2010), Waltraud Ziervogel’s brother, sold his Konnopke kiosk in Mahlerstraße, Weissensee. The Konnopke era in this location was over - original Konnopke 's  can only be found at the traditional location at Schönhauser Allee .

In Prenzlauer Berg they held out. After twenty years of uncertainty, at the end of 2009, there were signs of a solution. It took until May 2010 before the Berlin Transport Authority, the Local Government, the Conservation Department and Waltraud Ziervogel came to an amicable solution regarding the location of the kiosk under the viaduct. Sadly Charlotte Konnopke did not live to see this as she died in 2009. 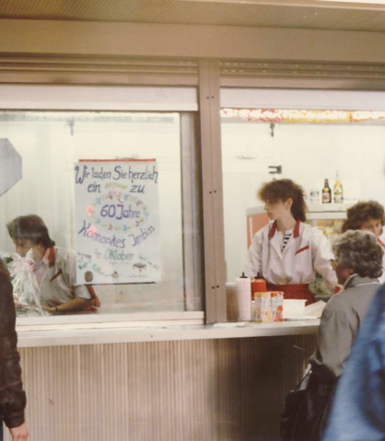 Konnopke 's Imbiss in Prenzlauer Berg remains. Until the the new kiosk opened at the old site in Spring 2011, Currywurst was available across the road on the centre island from a bright red sausage stand.

28th of April 2011 was the grand opening of the new kiosk - Berlin celebrated enthusiastically with us - they had remained loyal during the construction period. In 2014 the branch in Romain-Rolland-Str. was sold and since that time the business at the historical site is run by Waltraud Ziervogel and her daughter Dagmar Konnopke.

Our souvenirs are only available at the kiosk.

The ideal present for Konnopke fans 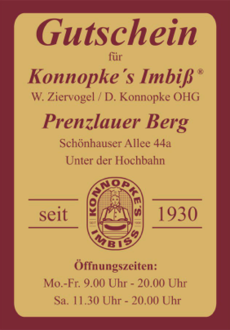 You can get them from the kiosk and they are valid for 2 years.

Here you have the opportunity to contact us with questions and suggestions simply online. Table reservations possible from a group of 10 persons.

Work out your route to us!

This site uses cookies to store information on your computer. By clicking the button, you allow us to improve the user experience on our website and personalize ads for you.

Yes I agree
Reject all